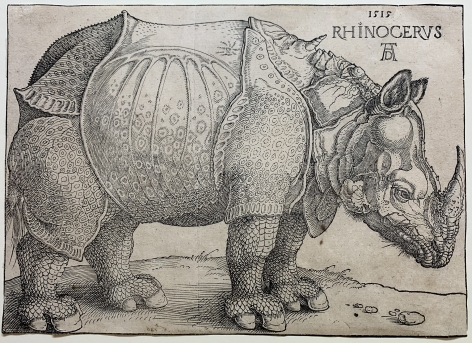 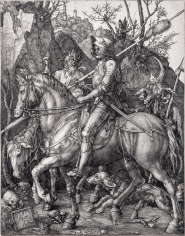 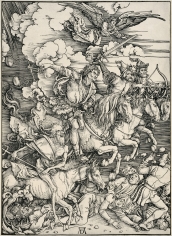 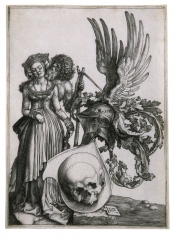 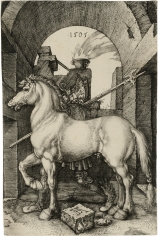 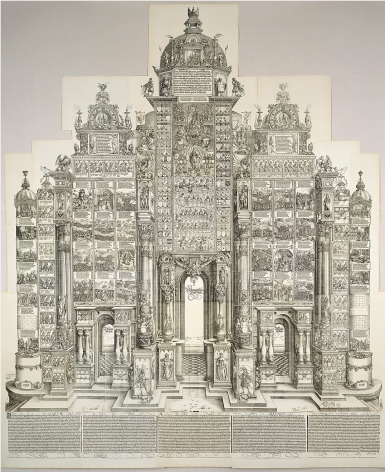 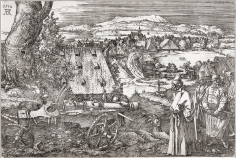 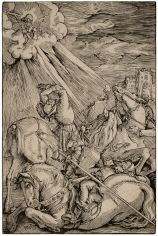 Albrecht Dürer was the towering genius of the Northern Renaissance. Painter, draftsman, and printmaker, it was his prints in particular that served to spread his name, fame, and influence throughout the European world beginning in the late 15th century. This exhibition, our first online, highlights innovations in all three of the techniques in printmaking during the time of Dürer – woodcut, engraving, and etching – as exemplified in some of his best known graphic masterpieces. It also celebrates the continued relevance of his iconic images.

Dürer was born in Nuremberg on May 21, 1471. As a young man he trained with his father, a skilled goldsmith, and in 1486 he became the apprentice to local artist and publisher Michael Wolgemut, whose workshop produces woodcut illustrations for major books and publications.

In 1492, during his Wanderjahren (journeyman years), Dürer traveled to Colmar with the intention of studying with Martin Schongauer, but the master engraver had died by the time of Dürer’s arrival. Dürer’s study of Schongauer's engravings, and the graphic work of other early northern masters, such as the Master ES and the so-called Housebook Master, had a strong impact on the young artist.

In 1494 Dürer returned to Nuremberg, where he married Agnes Frey. He departed a few months later to escape an outbreak of the plague, travelling to Venice on his first trip to Italy. There he associated with some of the greatest Italian Renaissance innovators like Bellini, Carpaccio, Giorgione, and Raphael.

In 1495, back in Nuremburg, Dürer embarked upon a career as a printmaker, draftsman, and painter. In 1498 at 27-years-old he made and published his Apocalypse woodcut series, a highly successful venture that generated strong public interest in Dürer and his prints.

In the summer of 1505 the plague resurfaced, and Dürer again left Nuremberg for Venice,
where his reputation was such that he was entreated by the government to establish official residence. He was so well known that he felt compelled to file a legal complaint against the engraver Marcantonio Raimondi, who had repeatedly copied his works and monogram, the initials AD, selling the fakes as originals. (The court ruled that Raimondi could continue making copies without the monogram. The case stands as a benchmark in the development of intellectual property law.)

In 1507 Dürer went back to Nuremberg, and in 1511 he reissued the Apocalypse and published the Large Passion, Small Woodcut Passion, and Life of the Virgin. In 1514 Dürer completed his three “Meisterstiche” engravings (German for “printed masterpieces”): Knight, Death, and the Devil, Melancholia, and St. Jerome in his Cell.

Emperor Maximilian I, the most powerful ruler in Europe, appointed Dürer to be court painter in 1515, and the same year commissioned Dürer to make the Triumphal Arch, a monumental tribute to the emperor’s military feats and one of the largest woodcuts ever made at nearly 12 feet high. The appointment was re-confirmed by Maximilian’s successor, Charles V, in 1519.

Dürer traveled to Switzerland in 1519 with Willibald Pirckheimer, the great humanist, and in 1520 to the Netherlands. In 1521 he went to Zeeland and Bruges, where he saw the Michelangelo marble Madonna, and Ghent, where he viewed the altarpiece by van Eyck and work by Rogier van der Weyden and Hugo van der Goes.

In later years Dürer became increasingly involved in theoretical writings on geometry, fortification, and proportion. He wrote, “…since geometry is the right foundation of all painting, I have decided to teach its rudiments and principles to all youngsters eager for art” (The Teaching of Measurements, 1525).

Dürer died on April 6, 1528, possibly as a result of a malarial infection contracted in 1521 when he had gone to Zeeland in the Netherlands hoping to see a stranded whale.