The Battle of the Pictures​

A Rake's Progress, the complete set of eight etchings and engravings on laid paper

A Harlot's Progress, a complete set of six etching and engravings

A Company of Undertakers 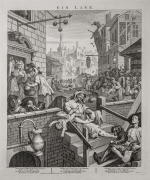 It is not an overstatement to characterize William Hogarth as pioneering and revolutionary. For his time he was avant-garde, cutting-edge, and shocking in his depiction of audacious subject matter. Trained as both a printmaker and painter, it was his prints that enabled him to reach and scandalize a domestic and international audience. Several series of his etchings – in particular, A Rake’s Progress, A Harlot’s Progress, Marriage à la Mode and Gin Street, Beer Lane – moralized, titillated, and with their massive popularity and commercial success brought Hogarth and English art its first widespread recognition beyond England's own shores.

The material in this catalogue is the complete private collection of Hogarth prints formed by a discerning American collector, Herbert M. Schiller, M.D. Dr. Schiller did most of his buying in the 1990’s in London. The major sets and most of the major individual prints are represented.

The collection will first be offered en bloc so as to try to keep it together, but if it does not sell in its entirety, at some point we shall make the individual items available.